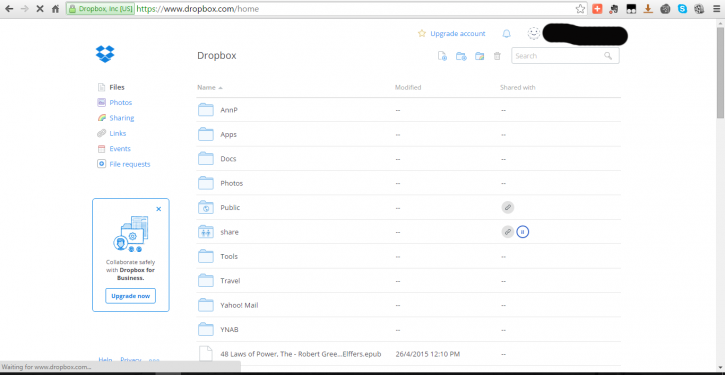 I recently faced a serious challenge. I wanted to update my OSX in other to be able to test the iMessage beta for the Lion OSX. The update file was 1.3GB in size, combine that with a slow (pretty fast the first few weeks of signing up) internet connection and unstable power and getting that file down could run into months or never if you insist on attempting a direct update. Pulling a 1.3GB file from a website without a download manager (Apple runs an ecosystem and I haven’t found a download manager that works well with their downloads) is pure masochism and like I have stated previously I am not a masochist.

Drop Box to the Rescue If you are not familiar with dropbox click here . If you are read on. I have often used dropbox as my web based flash drive. I would push a file onto my drop box folder while at work and the file is pushed up into the clouds. When I get home and pull it down gradually unto my home system by starting up my drop box. This same principle I have found to be the most effective way to beat the combined epileptic power and ever deteriorating internet speeds. While this solution works when I don’t have a flash drive but still need to move work files home, you would wonder how I could apply it to pulling down a large file off the web. Well it requires another important component – The remote system.

The Remote System Based on my work I have access to some remote servers which have drop box conveniently installed. These servers are based in countries where neither bandwidth nor power is a problem. To cut the long story short, by accessing the Apple website from this remote system I download the 1.3GB file unto this server in just over 10mins. The file was then copied unto the dropbox shared folder on the system. In another 30 mins the file had moved unto the drop box in the cloud. In other words in approximately 40 mins I had moved a 1.3GB file around. Now that’s faster speed than some flash drive transfers. The challenging part was getting this file down to my iMac this is where the patience came in.

The Last Mile The minute I turned on my work laptop the drop box icon indicated there where files to be downloaded. Thus started the slow downloading process for my OSX update. I am not sure but I figure dropbox has a temporary storage where it puts files while bringing them down because the folder is usually empty but it keeps give you update on how long is left. The first time it started I noted that I had 39 days worth of waiting but then I guess the connection was as slow as could be that day. Over the next 5 days I kept watching for the message letting me know that the whole file was completely downloaded. By the fourth day I was reconsidering how many hours I would have to power my generator waiting for the direct update. (The usual 9hrs threat where each break meant a fresh start). I had resolved that maybe I would wait the month because the direct update option wasn’t guaranteed. Finally I saw the message and I had my update down in 5days 40mins.

Conclusion I have used this method several times to pull down large files usually a couple of hundred MBs previously. This was the first time I was using it on a file as large as 1GB. Dropbox appears the best way to legally download large files where there’s a bandwidth and stable power challenge. The only caveat is access to a remote server.